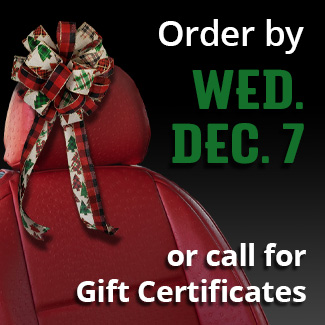 This Is Ruff Tuff.

The Ruff Tuff team traveled to Midland, Michigan, to meet the team from Humanimal for the first time and install custom seat covers on five of their vehicles.

Hans Olsen and Scott Gerrard of The Zone Sports Network graced us with their presence last month and produced their radio show here at Ruff Tuff in West Valley City.

He’s back! Jeff Zausch of “Naked and Afraid” fame made a return visit to Ruff Tuff at our factory in West Valley City, Utah, just six months after bringing his Jeep in. This time he had his 2015 Chevrolet Camaro.

The Ruff Tuff crew set out for Northern Colorado earlier this week to install custom seat covers on 5 trucks for Comanche Wilderness Outfitters, an outfitter for Worldwide Trophy Adventures.

At Ruff Tuff, we celebrate Pi Day by demonstrating just how well our custom seat covers can be cleaned to look like new again — even after a catastrophic mess like this.

Discovery Channel host Jeff Zausch (Dual Survival, Naked and Afraid) made his way to Ruff Tuff a couple weeks ago to get these gorgeous custom seat covers installed in his 2015 Jeep Patriot.

We had the great opportunity to meet with Corey Jacobsen of Elk101.com and Destination Elk out in Donnelly, Idaho, and install brand new custom seat covers on his 2014 Ford F-150.

Our friend Bill Goldberg invited us to his house to show off his new UTV seat covers. Thanks, Bill!

Mark Peterson made us a video about cleaning his seat covers. Thanks again, Mark!

Five minutes of some of our favorite seat covers, among other things.

We have fun blowing up seat covers with airbags, but there’s a method to the madness. We’re making sure our seat cover designs don’t interfere with seat-mounted airbags.

Entrepreneur, TV personality, and master hunter Mark Peterson likes his Ruff Tuff seat covers so much that he sent us these two videos.